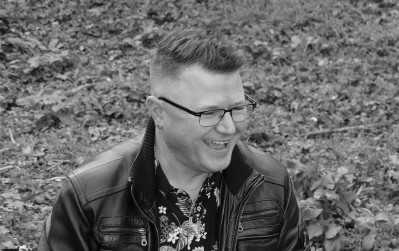 1/11/21
Revival Synth came across Kiffie earlier this year when he released his debut single 'Not The End Yet'.
A self confessed dreamer who explores life and feelings through his music.
To say he's had a busy year writing and producing music is an understatement.
I put a few questions to this fine gent to try and find out what it is that makes his mind turn into a musical production line.

Q. Hi Kiffie, hope all is well, and thanks for your time. We’ll start off from the beginning. When did you start writing music?

A. When I was 19, I didn’t go on a gap year, I worked in my local corner shop and started an indie band playing 3 chord covers and some weird emo-indie originals. We played one gig and broke up. Then 21 years later, April 2020, I bought a digital piano, a drum machine and a synth and started learning how to use them, writing songs. Recording them on audacity.

Q. Who were/are your musical influences?

A. All sorts, I love OMD, Depeche Mode, Erasure and all the usual 80s synth bands. It always makes people laugh when I tell them that I only know the hits. Don’t ask me about album tracks. I have no idea. Other than those groups I would say Trance, Nu-Metal groups and Beethoven. Ludovico Einaudi is a huge influence.

Q. To say it’s been a busy year for you would be an understatement, you’ve released how many albums and singles this year?

A. Yeah it has been busy. It isn’t really a choice, it’s a need and a way of life; a dream to replace the usual with the unusual. I’ve released 10 albums, 5 Eps and 2 stand alone singles. It’s a total of about 120 tracks – but I haven’t counted. Some of the tracks have been released on streaming platforms, but the only place to hear them all is Bandcamp.

Q. Maybe a crazy question Kiffie, but why this marathon of writing and releasing music in such a short space of time?

A. I always say I have nothing to lose. I neither know the rules nor care about the rules. The journey is secret, but the aim, the ultimate goal, shouldn’t be a surprise. It is naïve I recognise this, but I want my life to be surrounded by making music and performing it. I have spent the last 17 years of my life feeling restrained and restricted, surrounded by people that only want to control me and I have had enough. I can either accept my lot and continue working until I am eventually allowed to retire, exhausted and worn out, wrinkled and stressed from withholding the real me or I can try to live the life I dream of. I have to try and this music is me.

But why release so much? Well I don’t know. Why not? Why keep it away from people?

Q. Are some of your tracks from the vaults?

A. EMO-POP EP is made from tracks I recorded in November and December 2020 I released it for free to give some context about where I am coming from. Ancient Witness (A weird neo-classical electronic musical about mother nature) was written in August 2020. It languished in the background because at the time my recording and production skills were non-existent. For example the piano was only plugged in mono! I knew nothing. Other than that, every release is made in the few weeks before release day.

Q. I often see your tweets saying ‘Time for another album’....fast forward 2 weeks, the album is out. Where do your ideas come from? Your head must be producing tunes 24/7

A. It is. I have tunes and songs for everything, I experience the world in melody. I have songs for when there’s no more tins of beans left in the cupboard or for when everyone else’s daffodils are flowering and mine are still just green leaves.  My ideas come from somewhere inside me. The sad melancholic tunes are from the past. The hopeful ones are from the future.

Q. Are you working on a new album as we speak?

A. Yes! I might even be working on two. One will be the calm before the storm. One will be (hopefully) a euphorically hopeful yet painfully sad synth and orchestral extravaganza! My 12th album of the year will act as a summary of the year so far and will conclude this chapter, a sort of reference point for people in the coming years to understand what happened in 2021.

Q. Which artist/s have caught your ear on the scene?

A. This is difficult to answer. I have connected with so many people over the last year. If I mention anyone others will feel left out and I don’t want to make them feel that way. I buy music like a child at the checkout wanting a chocolate bar. If it makes me feel something I buy it. From classic stadium rock, to moody synth soundscapes via melancholic and introspective indie-pop. What I love about music is that every style, every genre and every artist is just trying to communicate something. When I buy something those artists can simply read ‘message received’.

Q. When you’re not listening to other artists on the scene or even yourself, who do you listen to?

A. I don’t have a lot of time to listen to much else but I can tell you what tune made me physically respond from my toes to the top of my head – Phoebe Bridgers, I Know The End.

Q. You often call yourself ‘The Dreamer’, Is it a musical dream?

A. Yes. It is a hope for a better time. For me, for all of us. We live in a fearful world, a depleted world and we are not free to follow our dreams. Life gets in the way. We all have dreams. I think John Lennon said it best ‘You may say I’m a dreamer, but I’m not the only one…’

Q. You hope to make a living from your music. As an indie artist, do you think it’s possible when we have a bloodsucking platform like Spotify?

A. Spotify is a tool that could have been predicted by George Orwell. Algorithms will only lead to a race toward more and more blandness. I release music there to have a presence only. I will never make money from it, Spotify will. There are other ways to make money and the best way for all of us probably hasn’t been invented yet.

Q. You worked on the EP ‘Fractured Features’ with fellow artists on the scene, such as : Slundarq, Mandy Alicia, Jamie Jamal, Better in the Dark, Steve Deeley and Wiley Soule. Do you have plans to collaborate with more artists in the future?

A. Yes! I go through phases of this. I have collaborated with others like Pulse Lab and Ade Wilding. I have collaborated with people from the UK, Ireland, USA, Canada, Italy, Finland, Australia – this is what the internet is for! My most common collaboration is with Richard Davies, he receives the message and interprets the music immediately whilst bringing something else I hadn’t heard. ‘Nothing Here’ from ‘No Heartbeat EP’ is the best example of this. Part of what I want to do next year is find a small group of people that get what I am trying to do, and to build a strong collaborative team that don’t just communicate over the internet but can meet in person and perform together.

Q. What are the pros and cons of being an indie artist?

A. The pros are obvious: We can do what we want, when we want. People might object or question it but so what? Cons for me are this: Approximately 10% of people that have heard my music really like it and have supported it. Now imagine if national and international media gave me (or any of us) wall to wall coverage when we release a new single. How would that translate? Just because something has a billion streams, it doesn’t make it any better than what we are doing. It is all about exposure.

Q. Your track ‘Saviour’ made it onto the Generation Blitz album, that must have been one of this year's highlights?

A. It was absolutely. I didn’t realise how much of a big deal it was at the time. I was beaming from ear to ear when I got my copy. I just thought ‘this is unreal, I’m on this, that silly song I made is with all these other awesome tunes, wow!’.

Q. What have been the other highlights of 2021 for you?

A. Other highlights this year? There have been so many! In no particular order…

*Being played by Chris Watts in January (and since) and finding like minded people that I had no idea existed via that show.

*People liking my music enough to buy it. This always surprises me. Thank you to them!

*Finding new friends when all I was trying to do was share my music!

*Being played and interviewed on New Music Saturday, Mike and Dr Bones have a great show and give a different perspective!

*Being played on all the other shows, even if I haven’t mentioned them by name here those hosts should know I absolutely appreciate the support they give. All of them!

*Being selected by Tom Robinson at BBC Radio 6 and played on national radio. This is ridiculously amazing. Another step on the road but a reminder also of the work still to do.

*Being featured on Revival Synth. Thank you for your support!

Q. Any plans to perform live in the future?

A. Luckily I read through the questions so yes, another highlight of the year for me was playing live at Norwich Arts Centre in support of Sink Ya Teeth. If one is going to have a ridiculous dream one must take every opportunity. When they tweeted they need support with 3 hours notice I had to say yes. I offered and about an hour later they said they would have me! I couldn’t believe it but had to prep. Didn’t have time to get nervous. I just went for it. Full Kiffie. It isn’t supposed to be like this, but now it’s done, next year there will be more (venues contacted) so watch this space!

Q. If another ‘Kiffie’ style artist suddenly appeared on the scene and asked you for advice, what advice would you give him/her?

A. Do what you want. Take every opportunity. Proof read your tweets before hitting send.

Q. Thanks Kiffie for taking time out to complete this Q&A. Be honest, did you break away from this Q&A to write another track? Lol

A. Thank you to you and everyone that supports me and all of us however you do it. Without support I am just a sad man, writing sad songs with no audience. Every listen, every play, every word of wisdom encourages me to continue. So I guess you could say this is your fault! Thank you x Kiffie