Manuel/Enimatik : I continue to expand the community section of the web, this time the interview will be made to Andy, from Revival Synth. I anticipate toall of you that this website is possibly the best platform for the promotion and support of independent electronic music that I have ever met.

If you have followed me lately, you will know that Enimatik has recently been interviewed on Revival Synth, my friend Andy's website, www.revivalsynth.com/q-a-with-enimatik/, which I invite you to read. The truth is that I thought the best way to thank Andy was to propose an interview here.

How did I meet Andy and Revival Synth?

Well, a few months ago we started to follow each other on social network. Soon after we started chatting and I realized that I was in front of a person in love with electronic music with a lot to offer to any fan or independent musician. Browsing their website, I was hooked. Revival Synth, as Andy himself puts it, is a shop window for new and independent electronic artists, giving the unheard a platform to be heard. Weekly favorites lists, interviews, reports and everything related to the independent electronic music scene appear on the web. I really think it´s a fantastic platform that you should not miss.As usual, who better than Andy himself to meet Andy and Revival Synth?

"Hi Manuel, thanks for the opportunity to feature on your website. My journey with music goes way back to the early 70s, hearing George Harrison’s ‘ My Sweet Lord ’ on an old transistor radio was an instant joy to my ear, a song I still love today, and it still takes me back to that little lad hearing it on his way to school.I was raised in an irish household where irish music was the main form of entertainment, it was like my Dad had brought Ireland to the UK with him, and we’d spend many the boring hour listening to old irish classics as well as the new up and coming stars that were coming out of Ireland. Funny thing is, when you hear it so much, you grow to like it, and as I grew up I continued to listen to a few of the artists I’d been brainwashed with lol

Fast forward to the 70s & 80s. I started hearing instrumentals like ‘Light of Experience’ from Gheorghe Zamfir, ‘Deer Hunter’ by The Shadows, ‘Oxygene, Part 4’ - Jean-Michel Jarre, ‘The Lonesome Boatman’ by Finbar Furey, ‘I.R.E.L.A.N.D’ by James Last, ‘Missing’ - Vangelis, and of course, my favourite band, Simple Minds were releasing singles with instrumentals as b-sides. I always looked forward to hearing what Mick MacNeil had produced. He is probably one of my all time favourite instrumentalists, listen to ‘Sons of Dan’ and you’ll hear why ;-)

There’s something about an instrumental, it takes you on a journey within your mind, and you can actually write your own story to the music. Take your track 'Arikflow’ as an example, I can sit back and listen to the track, and I see the news with our planet being destroyed by fires, viruses, war and greed, and the music follows the journey of an endangered eagle flying high above and watching Mother Nature repay human nature for everything it has done to our beautiful planet.

To this day I still play my guitar, trying to master the sound of my guitar heroes, Hank Marvin & Charlie Burchill.I got my first guitar when I was 14, my father didn’t realise it should have 6 strings, this one had 3 lol

A school friend back then was trying to set up a punk band called, The Anti Bodies, a great name in today’s world. He was after a guitarist, and I told him I had one, I didn’t mention it only had 3 strings though, and I was quickly a member of his band.To cut a long story short, I was sacked after I refused to wear purple leather trousers as well as been caught with The Shadows single 'Equinoxe' in my school bag. It was deemed too uncool for a punk band. I did try and use the excuse that I was learning chords through Hank Marvin to improve my guitar skills. Once they saw the guitar, the game was up lol

Revival Synth was born 2012-2013. Around that time, like so many of us, I was looking for something to listen to that wasn’t mainstream. I wanted to listen to something new, something that the usual joe public weren’t listening to, and I happened to delve into my 80s collection of favourite tracks and wondered if there was an underground electronic scene going on anywhere, and just by finding the DJ, Rob Harvey of Phoenix FM, it opened up a whole new world of music for me. Not only was I introduced to artists like Tenek, Spacebuoy, Shiny Darkness, Low Tide Theory, but I was finding amazing instrumental artists such as Paul Alty, Odd Common, Foreign Technology, Jeff Appleton, & Steve Mainwaring aka One Of The Crowd, Steve kindly let me use his orchestral arrangement of ‘Mickey’, taken from the Rocky film, for my wedding video back in 2014. A beautiful piece of work! 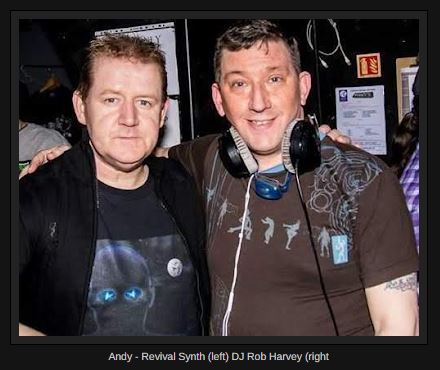 I was hearing all this amazing music and for me it was criminal that this music wasn’t being heard by the masses. I then came across a gent called Rob Dyer on Facebook, he was a photographer, promoter and reviewer for some of the indie artists at that time, and he’d write reviews on his site dsoaudio of their music, gigs etc…

I had a good look at Rob’s site and I had a brainwave to invent something similar, a new home for indie artists to try and get their music heard by a wider audience. It was a simple idea that quickly grew into something bigger than I could have imagined.

I contacted the lovely Cheri Freund, a digital artist from the USA, about a logo for the site and Cheri obliged and the logo above has become the iconic image for the site. Once I bought a domain and put the word out there on social media, my inbox was being filled with music from across the globe by artists who wanted their music to be found by a listening public. Some to this day, didn’t want fame, fortune or popularity, they just wanted to get their music out there in some form, and Revival Synth gave them that platform.

The site grew into something more than I thought it would, and in 2016 I had to take a step away from it. I lost sight of what was going on in my personal life and it bore consequences that I won’t go into, but it was a difficult period for me.

I resembled the early days of the site to that of the film, ‘The Awakenings’, I felt I had brought life into something and I had to put it back to sleep in some form.

I brought the site back to life in 2018, but on a smaller scale. It’s nothing near as hectic as it was back then, and I often put my foot on the brakes when I feel it’s going that way. As much as I love doing what I do, I have to keep reminding myself it’s a hobby, a passion for music. It doesn’t pay the bills!

It’s a free site and always will be. To ask musicians for money to be featured on the site would be a sell out for me and the artist, some make nothing as it is. I’ll leave that side of it to those who want to exploit indie artists with empty hopes and promises.

I’m fortunate enough to have some amazing supporters of the site.

Thomas aka Blondeking, is the main sponsor of the site, an absolute star! Thanks Thomas!

My promoter in crime is Mr Thierry Noritop of Stereo In Solo. Thierry selflessly promotes on Facebook for me, not my most favourite social media platform. I feel hypocritical at times, because I actually dislike social media, but I have to use them to promote my site, double edged sword to be honest!

Richard Tracey aka Jigsaw Sequence, the producer of the site’s theme tune, which is his brilliant track ‘Beyond The Veil’ given an exclusive orchestral remix.

DJ Rob Harvey - Rob has been there since day one. A man I’ve had the pleasure to meet on a few occasions, a man I’m happy to call a dear friend.

Stevie Newton & Mark Littlemore aka GLYDA - who kindly gave up their time to produce the charity single, Bell of Hope back in 2015. I sent the guys some lyrics and they did the rest. It raised a few quid for a children's cancer charity, so that was a bonus.

Another track I wrote lyrics to was, ‘Au Revoir’ a track produced by Aitor aka Chatterbox2011 who I can no longer find on any of his links. One of the many talents that seem to disappear without a trace, which is a real shame!

A huge thanks to all the radio stations, podcasters and record labels that send their music my way, but most of all, The Artists! Without them and their support, the site wouldn’t exist.

As Revival Synth quietly ticks away, it’s always open to fresh ideas and better ways of helping promote the artists. A lot of artists are doing great work in promoting each other through Spotify playlists, so it’s always a challenge looking for other ways to promote because I don’t buy into Spotify’s concept, especially the pittence they pay indie artists, but that’s the sign of the times and we have to sometimes either bail out or go with the flow.

As I sit listening to your new EP ‘Anilatian’, an EP full of hopes, dreams and desires. I think all the artists out there should follow their dreams. Do what they love doing, do it their way, don’t let their music and decisions be based on what social media dictates or what’s ‘going down’ with the ‘in crowd’.

Thanks Manuel, much appreciated!

Well I suppose you have already realized the value of what Andy is doing with Revival Synth. Really as an independent electronic artist for me it´s a privilege to have been interviewed by him, and I must thank him for his work providing a platform of that quality so that the unheard are heard. Don´t forget to visit Revival Synth and support Andy, he deserves the best of us.I don´t want to end the post without thanking Andy for his support of Enimatik and the opportunity he has given us so that many can learn about this musical project, thank you Andy!